FLIMEN Note; The above statement regarding immigration status is of course not true, as there is no exemption as claimed.

The wages from those matched at El Sol are gnerally in cash and of course untaxed. The taxpayer is getting screwed by the Town of Jupiter because they have enabled the following financial impacts;

Another cost of El Sol is the human cost to our veterans, homeless, or disabled who are struggling on limited resources. It should be highly objectionable that the significant resources of food, education, bikes and considerably more are being diverted to those illegally present in the US rather than legal Americans.

This El Sol effort is NOT a short term transition effort to help the needy. Many of those at El Sol have been there for nearly a decade. Francisco Montejo Quiñonez has been a registered worker at El Sol for about nine years.

The Jupiter Illegal Alien Hiring Hall (AKA El ) in Jupiter, is officially sanctioned by the Town of .  Jupiter spent $1.9 million for the El Sol building to provide jobs to illegal aliens.

The El Sol Resource Center (AKA Jupiter Illegal Alien Hiring Hall) in Jupiter, Florida opened September, 2006 despite several years of significant opposition.  Opposition was from Jupiter residents through a now defunct organization known as JNAIL as well as other organizations including FLIMEN and FAIR.  The center was created to supposedly solve the problem of 'migrants' from soliciting work on Center Street.

Jupiter spent $1.9 million for the El Sol building and provided the center to address the day laborer phenomenon for a mere $1 per year.  The building had a 2007 religious tax exemption and annual taxes are a mere $1,839.   Other costs to taxpayers include public education, emergency health care, law enforcement and on and on.

The original 2006-2007 lease was with the Catholic Charities Diocese of Palm Beaches which in turn subcontracted with Corn Maya Inc., a migrant support group headed by Dr. Timothy Steigenga, a Florida Atlantic University professor and director of Corn Maya.  Catholic Charities had received a $180,000 donation from an anonymous source.  In July, 2007 Catholic Charities declined to renew the lease which expires December 31, 2007.  The Town of Jupiter then created a three year lease with El Sol, Jupiter's Neighborhood Resource Center Inc., which starts January 1, 2008.  It is unknown how the main fundraiser, Dr. Timothy Steigenga, is obtaining the necessary funds to continue operation.  FLIMEN is attempting to follow the money source.

The Town of Jupiter is symbolic of what is wrong with our country.  By officially condoning El Sol's untaxed, illegal hiring of foreign workers to the detriment of American workers and taxpayers, Jupiter is providing a job magnet to further the illegal invasion.

The problem of street job solicitation is an inadequate reason to blatantly contradict federal immigration laws, regardless of federal dysfunction.

Citizens are demanding enforcement of immigration laws.  Our democratic value of the rule of law deserves nothing less.  The only solution is for El Sol to become immediately compliant or to shut down.  Two federally compliant solutions available to local governments are;

In any case Jupiter should quickly and aggressively implement these programs.  However, proper implementation would prevent eligibility of an estimated 84% of El Sol workers so it is safe to say that no option exists for the center to remain open and compliant.

The solution most often discussed is the concept of removing the job magnet with the goal that illegal aliens will return home on their own accord.  It is imperative for Jupiter to remove the job magnet by closing the center and then enact 287(g) and E-VERIFY.

HELP SUPPORT THE RULE OF LAW AND AMERICAN WORKERS WHO DO NOT HAVE JOBS OR ARE WORKING FOR SUBSTANDARD WAGES BECAUSE OUR IMMIGRATION LAWS ARE NOT BEING ENFORCED. 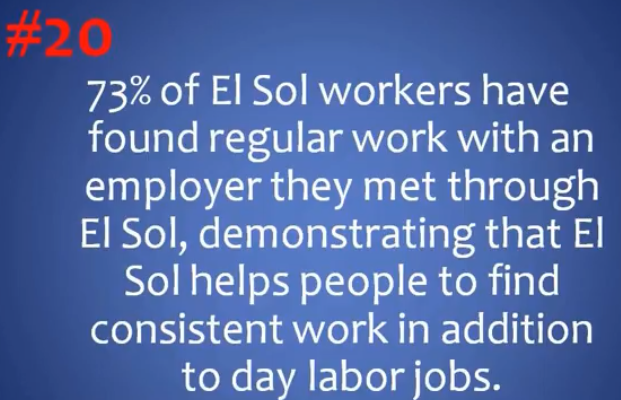 Note the collaboration with the Mexican Government for Mexicans in the Exterior.